Google just released their latest pet, Google Chrome OS. This is not exactly what you think it is. :) The existing idea of an operating system is a software which is packed with load of goodies, games, system tools, a desktop, some kind of menu bar, task bar and blah blah blah!

But Google is trying to defy that concept of a traditional operating systems. They have a built this OS which primarily targets the Internet. Their OS is the Browser! If you are running Chrome OS, you need to do all your stuff on the Internet. It has a vague offline support. I do not see any option to install some software. I would say, its not just an OS, its a Cloud Based OS.

**Will it replace Windows? — NO WAY!!**> Its more of a companion device for Tablets and Netbook. This cannot get into the mainstream OS market at least for the next 4–5 yrs until the Cloud is a reality!

It will only depends on the the web applications developed by Google/3rd party websites. That mean, if you need to open a .doc file, open it in Google Doc. There is no concept of installing .exe files or any other application. You will be dependent on the services provided by Google and some other sites (which will be supported by Chrome OS).

How to install Chrome OS on your VirtualBox 3.0

Note: This is a developer build We can expect more improved features in the official release some time next year.

I have also attached some screen shots!

If you are a developer, you can also build the source code on Ubuntu. Get more information here. 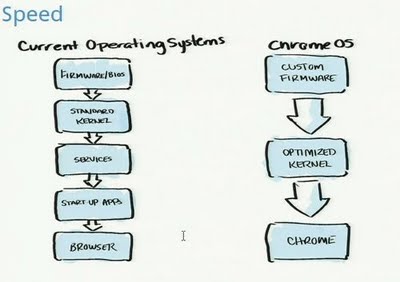